The solo exhibitions by Finnish contemporary artists at Laukko Manor engage in a fascinating dialogue with their historical setting.

Heikki Marila takes viewers into the pitch-black depths of Finland’s history. Moosa Myllykangas, too, holds a conversation with Laukko’s history. 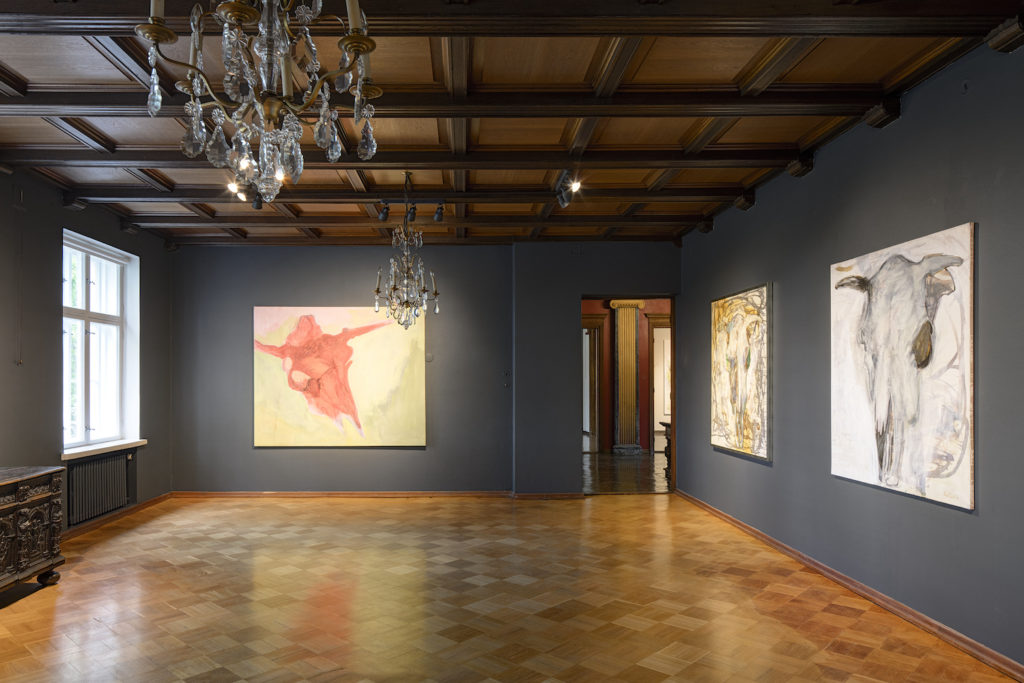 Marjatta Tapiola, daughter of a farming family, left home to study art in Helsinki at the end of the 1960s. More than twenty years later, she returned to that home in Sysmä and set up her studio in a former threshing barn.

By the end of the 1980s, Tapiola had got her hands on an elk’s skull, which her father had shoved under a barn. She transported it back and forth between Sysmä and Helsinki. It was years before its shape was delineated in a painting.

Tapiola received the calf’s skull frequently seen in her works as a gift on a visit to a Swedish manor house. Due to the repeated use of the skull as a model, pieces have broken off it, and in the paintings depicting it we can virtually tell in which order they have been made.

What has prompted this artist who lives in the country to paint skulls one after another? For one thing, the skull is difficult and challenging as a form. It does not let the painter off easily, but offers endless possibilities. Conversely, the stark contrasts characteristic of Tapiola’s art converge in the skull: it intertwines the beauty and horror of life and death in a way that does not leave us unmoved.

Since the 1990s, dozens of paintings on the skull theme have been created in Marjatta Tapiola’s studio, the best of the lot now being chosen for Laukko Manor’s summer exhibition. Also on display are totally new works made for the Manor’s rooms. 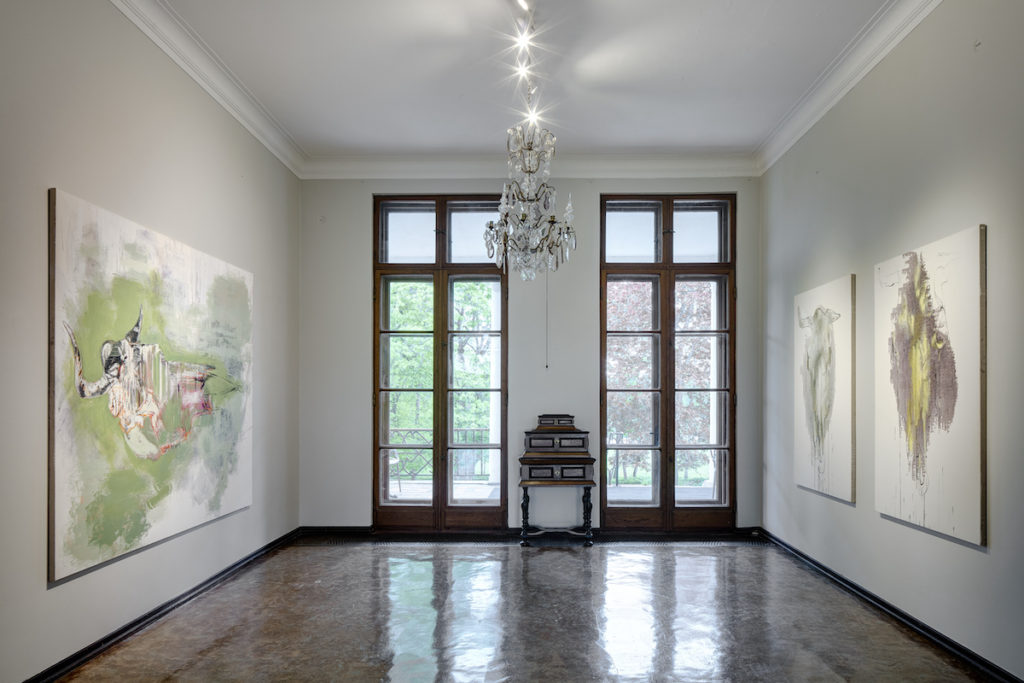 In 2016, Heikki Marila turned his gaze to independent Finland’s painful first steps. In this monumental series of paintings memories silenced by history are given a powerful voice and form.

rom the series, which has become viscerally topical with the war in Ukraine, eleven works have been chosen for Laukko. With this exhibition we want to honour the memory of those who have perished in the brutal currents of wars near and far.

In the paintings Marila forces himself and his viewers to experience the moments of horror of White and Red terror. Executions and prison camps painted from archive photographs have been placed at a distance in the works’ background.

With this receding painting technique, Marila reminds viewers of muted traumas growing dimmer down the chain of generations. At the same time, the paintings are detached from the specific time of the events and become part of the universal history of cruelty and suffering.

In the spirit of German neo-expressionism Marila interprets the weight of grief and shame that we as a nation and as individuals have carried with us from the atrocities committed in our wars.

The exhibition’s stunning impact springs from the marks of the red oil stick hovering over the intentionally smooth surfaces. The drawn line depicts the emotional states ranging from fury to despair that the cycle of violence arouses in Marila.

Memories of 1918 live on in the histories of families and places. Apokalypsis is the sombre landscape of the soul of Lahti and Karelia. Marila has based the painted portraits on his family photograph album and on fragmentary memories associated with his family. The works speak of his attempt to envision his own male, Finnish bloodline.

The gallery floor is showing works by the renowned virtuoso drawer Kauko Lehtinen (1925-2012). The exhibition has been put together from this master of improvisation’s own collection.

The drawings and paintings spiced with irrepressible humour never cease to offer viewers moments of insight. The exhibition focuses on the 1960s and 70s, when “the Picasso of Turku” became friends with the residents of the Manor.

Lehtinen himself has chosen the baroque drawings on display in the end room specifically for Laukko.

Viljami Heinonen’s Sanctuary was painted this spring specifically for the walls of Laukko’s former Stables. The lusciously colourful and fantastically painterly works are bursting with surprising twists and exciting encounters.

The intense manner in which the painting has been done can be seen and felt throughout the exhibition as a maelstrom of kinetic energy. The architectural elements bring a new structural depth to the jungle-like visions of the future.

The exhibition’s narrative tension is built up via collage-like animal figures that live on the outskirts of towns reclaimed by nature. At Laukko feral predators, colourful graffiti and abandoned containers take Heinonen back to his roots as a visionary.

Tapani Kokko’s Pagan Church (2018) stands on top of a Viking-era graveyard in Laukko’s grounds. The jubilant Gates of Paradise (2020) leads to a chapel of art.

The series of sacred images seen inside came about at Orimattila this spring. The affectionate works are a Finnish master of wood sculpture’s interpretations of Slavic icon and folk art.

Moosa Myllykangas’ (b. 1960) Cage has been built in Laukko’s old henhouse. The work of the title that opens out from the door has found its inspiration in the history of the exhibition space.

An idiosyncratic dialogue runs light and surprising through the exhibition, where materials found by chance are transformed into elegant shapes.

In the medieval cellar we see the immersive installation The Selfie of Narcissus (2018). The technical realization is by Janne Hokkanen and Juha Saarikko.

Please note that our exhibition premises are not accessible to people with mobility issues.